Meet Linnea Kirkegaard: American-educated forensic anthropologist and Danish-born world citizen. Much to her own surprise Kirkegaard now holds a temporary position at the Institute of Forensic Medicine in Copenhagen, far from her normal life as a highly respected international expert in human skeletal remains.
She normally spends her time solving spectacular criminal cases or uncovering mass-graves in countries ravaged by civil war.  Although she has lived and worked most of her life abroad, her father’s burial brings her back to Denmark.

The body is slender, almost child-like, but there is nothing fragile about the woman who invites us into the big half-empty attic apartment in Knabrostræde, Copenhagen. Her eyes are dark and intense and the slender hands are gesturing lively when we are discussing a particularly interesting subject. And in the company of forensic anthropologist Linnea Kirkegaard interesting subjects are more likely to be discussed than not–she is not one to dwell on unimportant issues.

Linnea is on leave from her position at the Institute of forensic medicine to participate in the excavation of a suspected mass-grave from the Spanish Civil War in the mountains near Valencia.
I managed to catch her on one of her short visits to Copenhagen.
- In a way I think I prefer bones to people. They are not as complicated to deal with– and then they never tell a lie.
Linnea curls up in the sofa, blows her coffee and reveals that she knew she wanted to work with the body, and especially the human skeleton, ever since she was a girl.

With a smile she tells me that being a skilled forensic anthropologist means big business in the U.S. But her distance to the past is clearly evident, she has had enough of making money by working for insurance companies.
Her ambition and drive comes from the wish to make a difference, like when she was in Rwanda a few years after the genocide and dug up hundreds of bodies. Amidst the horror and tragedy it made her understand how much it meant to the survivors to get closure and a body to bury.

Her work in Spain is different, because so many people actually prefer to let the past remain buried there.
- If I could stick to it, I would only work in the field. But you need to be pulled back to reality once in a while.
Her smile is crooked when the conversation turns to life in Copenhagen and the relationship with her ​​boyfriend Thor, homicide investigator with the Copenhagen police.

- No, it 's not all about death when we meet, but of course the work rubs off, Linnea says, pulling her dark short hair behind her ear. She elegantly avoids the question if they are going to move in together.

- Right now I am living in Valencia, so it will be a bit difficult, right? I never thought that I would end up in Copenhagen, we have to see what happens ...
STATUS
Who: Kirkegaard, born 1973 in Mogadishu, raised in Africa, Asia and Denmark.
What: bone expert, trained forensic anthropologist from Stanford and Oklahoma University.
The work: assisting police and archaeologists with bone finds at the Institute of Forensic Medicine in Copenhagen.
Right now: on leave to uncover mass-graves from the Spanish Civil War, close to Valencia.
In a relationship with: Homicide Investigator Thor M. Dinesen. Living apart.
Style: Casual quality

Fact box
• First major case in Denmark: Blood Will Have Blood (2011) where Linnea Kirkegaard became involved in a spectacular murder case that turned out to have links both to Denmark's involvement in the Iraq war, international trade in cultural heritage, and someone from Linnea's past. With the help of homicide investigator and maybe/ maybe not boyfriend Thor M. Dinesen Linnea survived a meeting with the American assassin Peggy Lee Wu.
• Also known for: Death Has Closed These Eyes of Mine (2012) where Linnea becomes involved in a violent case of arms trade and child soldiers with connections to a recent murder case in Copenhagen where a humanitarian organization is suspected. And new information about Linnea’s late father shows up in connection with the case.
• Current case: When the Sun Goes Down (2014), Linnea’s work with uncovering a mass grave from the Spanish Civil War is slowed down by the discovery of a fresh corpse that turns out to be connected to Denmark and to a large amount of Spanish gold that disappeared in the 1930s. At the same time Thor is working on a mysterious murder case and trying to prevent open war between criminal gangs in Copenhagen.

The Authors
This author duo consists of Danish authors Karen Vad Bruun and Benni Bødker. Karen Vad Bruun is an author and a translator and has worked for several years as a literary agent. Benni Bødker is the author of a number of successful books for children and teenagers. Previously he was an editor and his work included crime novels. Blod vil have blod was their debut as crime novelists and the first novel they wrote together.
Where do the titles of your crime novels about Linnea Kirkegaard come from?
KAREN : When we started our first crime novel I suggested it should be based on Shakespeare's Macbeth because it’s an exciting intrigue to try to update, so that’s where Blood Will Have Blood came from.
Death Has Closed This Eyes of mine came from one of the less known pieces, Henry 5, III, and the quote has a very special meaning for one of the book's main characters, a young girl with a dark secret ...
The basic premise for the third novel, When the Sun Goes Down, is based on King Lear, but the title comes from a Danish pop song by CV Jørgensen, aptly named Costa del Sol.

Linnea Kirkegaard is a forensic anthropologist. How did you come up with Linnea and her work?
BENNI: I think we both felt that when we first came to know Linnea we had a story! She is something different from the policemen or journalists we meet in a lot of crime novels.
KAREN: Linnea is a nerd who thinks that the most exciting thing in the world is to investigate half-dissolved bodies in a mass grave, where innocent people have been executed and forgotten. Her work seems macabre, but the aim is to restore human dignity to the tragic victims and there families. It requires will and determination and will also have some personal consequences for Linnea.
And Linnea's own story is just as interesting to explore, and as the story progresses Linnea is forced to admit that she too needs people to rely on. In many ways, the work is the only constant in her life. She grew up in a Danish diplomat family, around the world. Always on the move to the next country in Africa or Middle East. And when she finally returns to Denmark, it gives her an extra dimension. She possesses both the intimate knowledge of a native, and a foreigner’s differing point of view.

BENNI: We have also been fortunate enough to gain access to the forensic anthropological department at the Panum Institute and autopsy wards at the Forensic Institute and had the opportunity to question a coroner and, not least, one of the few forensic anthropologists who assist the police when they bones are found in Denmark. They have also worked at international excavations and humanitarian catastrophes and have been a great help in our research to give Linnea the right knowledge.

How do you work with the characters when you write together, do you ever argue about the plot?
BENNI: It can certainly be an advantage to write together when you are creating a character that is not just an extension of yourself. Of course we disagree and discuss for hours what the characters should be or how they should act.
KAREN: There is always a lot of work to be done before we start to write the novel, and among other things we spend a lot of time on the characters personality and background, trying to get to know them before we let them loose in the book.

How did you come up with the idea to write together?
KAREN: I was the one who got the brilliant idea that we should write a novel together. It was a great challenge to work on the plot but as we came closer to actually starting to write I became less confident. What if we couldn’t work together? And for my part, what if I couldn’t write at all?
It was a great relief for both of us when Benni was reading and gave my first five pages go ahead (in reality I think he really took out much of the first day's work, but we have never really talked about that ...).
We are both used to relate to literature every day and we discuss what ever we stumble upon. Now our discussions sometimes have a more specific goal.
BENNI: There are good reasons for so many author-duos in the crime genre, both today and among the classics (from Sjöwall & Wahlöö in Sweden to Ellery Queen in the U.S. and Boileau- Narcejac in France). A crime novel needs a good plot and conspiracies works best when more then one is about them!

Ø This captivating crime series has its roots in the highly regarded Scandinavian tradition of contemporary realism.
Ø It adds an international approach and engagement to a suspenseful plot.
Ø Great weight is put on creating strong characters—from gripping psychological portraits to distinct and sharply defined types.
Ø Each day global politics and bold new crimes define the latest headlines and these mirrors the theme and plot of these skillfully researched novels with a social involvment.


Ø And, not least, a strong, unforgettable main character. 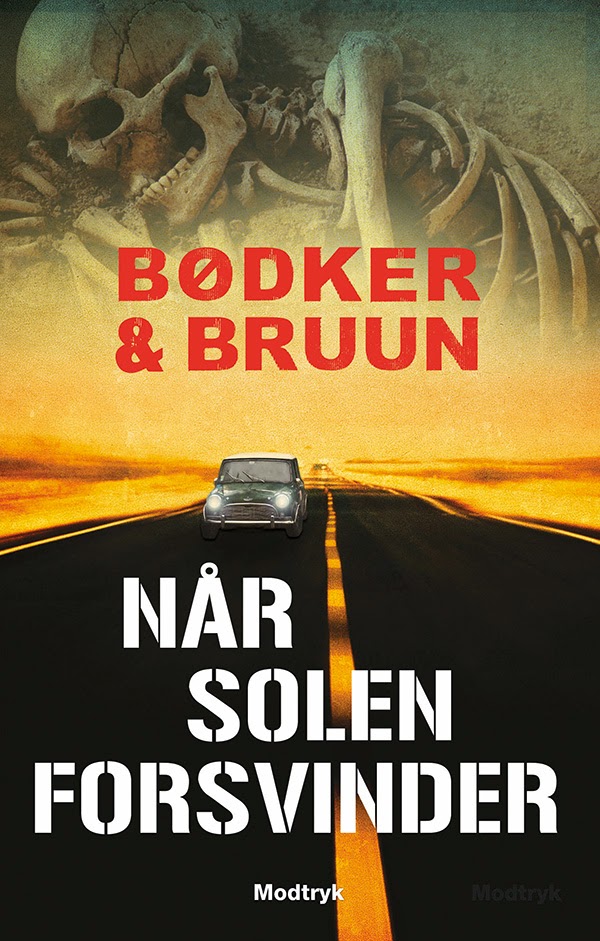